Fool’s Gold is an Aces & Eights adventure set in Lazarus, a boomtown on the rise, and the hills of El Diablo’s Caldera, land coveted by Imperial Mexico, the Republic of Texas, Deseret, and the United States, but occupied by “heathens, squatters, Indians and bandits.”

A strange influx of gold nuggets has caused a great deal of interest among the townsfolk of Lazarus, but is all that glitters really gold? Does a strange, solitary prospector hold the answers – or is it the local Apache – or a notorious gang of bandits? And whatever happened to the missing prospectors – or to the ghost town of Christian’s Folly? Attempting to answer these questions reveals ominous hints that everything is not what it seems. What ensues puts the players on the path to the solution, but the odds are against them, and many encounters await them within the dusty hills. Even what seems like success may be merely a prelude to revenge…

As well as providing adventures in town, wilderness, and subterranean settings, this special bookmarked 95 page PDF includes hooks for various types of player characters, plus local rumors, several reference and area maps, non-player character sheets in our popular Rustlers & Townsfolk format, and more, all in an easy to use format. Even after the players finish the adventure, you can use the supplemental material again and again. From subtle intrigue to intense action-packed combat, you’ll find hours of fun in this new and compelling adventure for your western campaign.

(95 pages including maps and NPC sheets, b&w and color)

This product was released with the original printing of Aces & Eights but can be adapted to the new system with little effort. 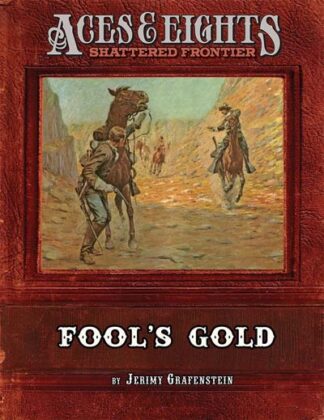