This “game within a game” contains rule mechanics that allow players to face justice and do battle with their legal adversaries in an attempt to clear their name and avoid the hangman’s noose.

Though some players may opt to follow the law, it is unlikely that everyone in a Wild West campaign will choose to do so. There’s just too much temptation!

This game provides rules and guidance to playing out a jury trial as its own self-contained game. Prior role-playing is both relevant and important as that will bear on the proceedings. Additionally, allowance is made for crooked judges and jury tampering – which will involve additional role-playing parallel to the meta game of the trial.

The principal contest is between the attorneys as they battle for influence during the three phases of the trial (opening arguments, presentation of evidence and closing arguments). Their skills are vital in swaying the final phase – jury deliberation. Players may, of course, represent themselves but a capable defense attorney is strongly recommended.

A skilled lawyer, perhaps aided by actions on the part of the defendant’s allies, may well prove successful in defending a client widely perceived to be guilty. But you’ll have to play out the game to find out…

As a digital product, you’ll need to print out the playing board to run the trial. A dozen six-sided dice are necessary to represent the jurors and their variable leanings as they are persuaded by facts and the lawyers’ charisma. But you’re a gamer aren’t you. Everyone’s got spare six-siders! 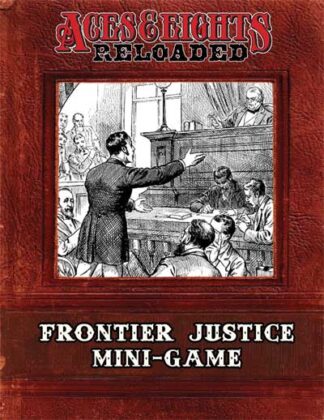