Witness the beginning of a great adventure! Shadis: the Science Fiction and Fantasy magazine was started as a small press magazine in 1990 by Jolly R. Blackburn – the first step in what would eventually become the Knights of the Dinner Table magazine! Originally a photocopied publication, we’ve made it available just as it originally appeared, now in a form unimagined at the time.

Shadis provides a myriad of articles to enhance your role-playing, along with fiction, reviews, and much more!

Fans of Knights of the Dinner Table, as well as HackMaster, will recognize familiar writers and creators, as well as early references to the lands of Alderac (eventually to be HackMaster’s Aldrazar/Garweeze Wurld). Set your wayback machine to 1990 and download this classic PDF for yourself!

Cries from the Attic – Editorial of a Madman by Jolly R. Blackburn

Hook, Line and Sinker: A new system for developing adventures off the cuff by Jolly R. Blackburn

From the Scrolls of Greytar: the rambling sage is back with more lessons on Alderac by Jolly R. Blackburn

Campaigns Made Easy: Role-Playing and Matrix Games by Chris Engle

Alderac the Play-By-Mail Game: The first installment of our new PBM system by various

Be the first to review “Shadis Magazine #6 (PDF)” Cancel reply 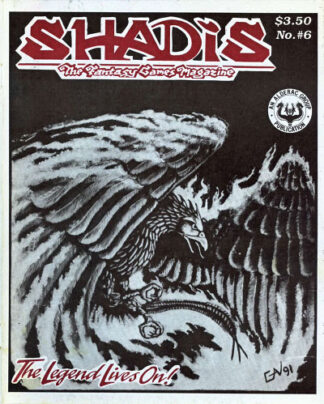