Blood Clans of Jorikk – Skarrn: The Tongue of the North (PDF)

Blood Clans of Jorikk – Skarrn: The Tongue of the North (PDF)

If you’re coming to the Blood-Clans of Jorikk for the first time, we recommend taking a moment to familiarize yourself with the intro material on the website, found at http://kenzerco.com/jorikk.

While differences may be found in the local dialects of the many and varied Fhokki clans and tribes of the Wild Lands, more remarkable is their consistency. Indeed, the similarities of the three primary Fhokki dialects offer clear evidence of a shared kinship between all Fhokki peoples.

The three primary Fhokki language dialects are distinct to the regions that use them. The Fhokki of the Middle Wild Lands, stretching from the eastern slopes of the Byth Mountains to the Great Eastern Steppe beyond the Jorakk River, primarily speak Hargg. The Torakki, who have dwelt upon the northern tundra for untold generations, hold to the old forms of the Torakki tongue, and do so proudly. The Skarrns and the Dunnvigr speak Skarrnic Fhokki. Within these three primary dialects some local variations may be found, especially within Hargg, but for the most part those concern differences in accent, idiom and slang.

The Fhokki dialect with which we concern ourselves here is primarily Skarrn, the tongue of the folk of Skarrna, and the Dunnvigr. Emphasis has thus been placed upon Skarrnic constructs and usages, as a treatment of the Fhokki tongue as a whole stretches beyond the scope of this work.

As to written forms, our understanding of Skarrn must come entirely from the Skarrns, for the Dunnvigr still regard quill, ink and the scribbling of words onto the semi-permanent medium of paper as a thing to be wondered at, distrusted, sometimes feared and, for the most part, ignored. The Dunnvigr, and indeed many Fhokki, see writing as, on average, a waste of time and, at worst, a sort of rune-magic used by foreign sorcerers to trap the essence of a person or reality. More moderate and reasonable Dunnvigr view writing with some reluctant acceptance, even regarding it as a sort of oath-making, where thoughts and spoken words are made concrete and thus bound un-breaking in the world, much as is done in a blood-oath ceremony.

This PDF is a primer to the Skarrnic Fhokki dialect and contains hundreds of definitions of vocabulary specific to this tongue within its 35 pages.

GMs will find this resource of eminent utility in adding localized flavor to adventures taking place within the realms of the Blood Clans.

Be the first to review “Blood Clans of Jorikk – Skarrn: The Tongue of the North (PDF)” Cancel reply 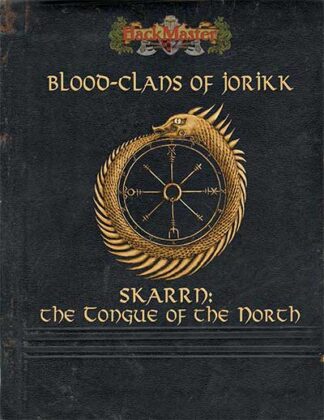 You're viewing: Blood Clans of Jorikk – Skarrn: The Tongue of the North (PDF) $2.99
Add to cart