The Apocalypse is here!

The dead of the Earth have risen, and now they roam the land seeking living beings to feed upon. Powerful undead such as vampires and ghouls command legions of flesh-hungry zombies in chilling, inhuman war bands. Small pockets of resistance remain as humans wage a desperate battle for survival in a world where the waters have turned to blood and the sky is night everlasting.

Final Days is a miniatures combat game where players command human freedom fighters or undead hordes in Earth’s final battle! The innovative combat system uses standard playing cards to determine the outcome of actions, and takes just minutes to learn. Play seamlessly with just two players or a group of eight or more! Everything you need to set up and play this fast-paced, hard-action game is included, and you can be up and running in no time!

So grab your shotgun and bar the doors. The dead are coming and nobody is there to rescue you.

Save a bullet for yourself.™

Be the first to review “Final Days” Cancel reply 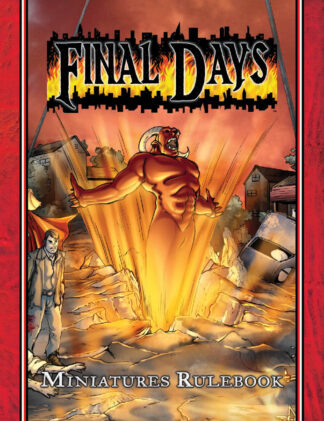