Welcome to the Wild West that could have been, pardner! The Aces & Eights RPG lets you relive the glory days of the “West that never was.” Whether you fancy yourself a gunslinger, lawman, rail baron, desperado, prospector, muleskinner, rancher or all of the above, you can step into their boots and blaze your own western trail.Since its release a decade ago, Aces & Eights: Shattered Frontier has sold through multiple print runs and garnered the coveted, Origins Award for Best Role-playing Game of the Year. With over two dozen supporting supplements, adventures and various game aids, Aces & Eights has a base of loyal devotees.To commemorate the tenth anniversary of this award-winning game’s release, we’re sending the world back to the Shattered Frontier for more trail dust, lead and action. This NEW version is no simple reprint — but a reloaded 2nd edition chock-full of new rules, tweaks, art and other enhancements. Of course, we’ve kept the revolutionary Shot Clock game aids (Standard, Shotgun and Big Game versions).What is Aces and Eights Reloaded?Simply put, the Aces and Eights Reloaded game is the second edition of the world’s best selling, state-of-the-art, game-of-the-year wild west role playing game. This new edition will be leathered (if you choose Gunslinger! or higher reward level) and gorgeous, just like the first edition. Aces & Eights is a game that has the fastest, yet most precise combat system while still focusing more on roleplaying opportunities and character development than any other game. There are no levels and dozens of professions from which players can choose and even change as opportunity presents itself. Want to be a prospector because gold’s been found, sure thing. The mine’s played out before you stake a claim, you can turn to selling hardware or become a bandito or gunslinger. That doesn’t work, maybe a lawman or gambler? At each stop you can further develop skills and abilities used while following those professions. The book is 384 pages and comes with 2 silhouettes, Standard Shot clock and Shotgun Shot Clock.OK, but what else is in this game?The Shot Clock™ game aid isn’t the only gaming innovation in the Aces & Eights™ game. For instance, the game has a new chip-based brawling system that solves the problem of “temporary” damage; characters actually become winded, tired or knocked senseless in the fight. The realistically deadly combat supports an overall game system that rewards characters for pursuing professions and gives players the in-game incentives they need to do more than follow the outlaw trail. Aces & Eights RPG is the first western to not just allow, but focus on pursuit of the rest of the major western movie adventures beyond the gunfight: prospecting, cattle drives, frontier justice, etc., each with a complete system tailored for that type of adventure. In fact, the Aces & Eights™ game has over two score available professions that cover the gamut of possibilities in the Wild West: gambler, politician, lawman, cowboy, rancher, outlaw, craftsman, saloonkeeper, merchant, etc. With no levels or classes (and only gaining experience in skills used), characters can change professions at will, just like the Old West! 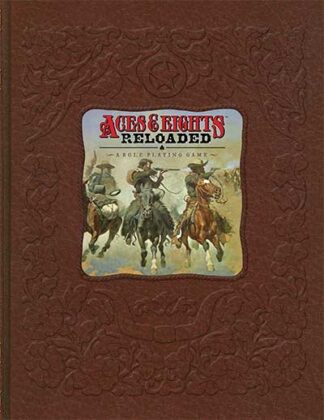