Enter a world where Stories have power, ordinary objects take on extraordinary uses, and both Heroes and Villians come in the most unlikely shapes and sizes. Enter the world of Fuzzy Knights. You might want to blow up your kid’s toy box… just to be safe.Beneath the surface of Kenzer’s and Company’s light hearted comic strip “Fuzzy Knights” lies a world unlike any other. A world where Stories and Imagination have power. Where good versus evil do battle with suction cup crossbows and flame thrower lighters. It’s a game that can be as serious or as silly as you want it to be… but let’s face it, it’s pretty darn silly.The Fuzzy Knight RPG uses “The Fuzz Engine”, designed to be familiar enough for regular players, and simple enough for novices to enjoy. This could be the first game you teach your children (or your nieces and nephews behind their parent’s backs). Luck is available whenever you need it, just use a Story Point. But when you do there is always a price to pay, as Irony Points mount and your GM rubs his hands with glee. Don’t be fooled. This isn’t a game where the worst that can happen is being “bonked” unconcious. The unwary might quickly find themselves a pile of burning flame-resistant goo on the kitchen floor.The complete Fuzzy Knights RPG includes everything you need to make your own Boxed Edition! It has “The Fuzzy Guide” for Players, “Storyteller’s Guide” for GMs, “Creatures and Creations” for all your Monster needs, a GM Screen, Whammy Stickers, an Adventure Module for beginners, Cutout Figures, a map of The Neighborhood, and a Box you can make to put it all in! It also includes the complete bonus game “Ben’s Battle Chess”. It’s Chess, with a “Kill em and take their stuff” attitude!The Fuzzy Knights RPG: It’s not just a Game, it’s an Arts and Crafts project! 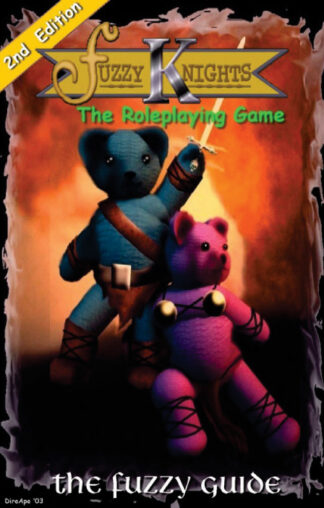