Breaking through the pages of the award-winning Knights of the Dinner Table comic come the Black Hands 2010 specials!

Note: The print edition of this comic is sold out. However, this special “Director’s Cut” PDF is now available featuring FULL COLOR strips and two bonus deleted scenes.

This three-issue miniseries focuses on the hilarious gaming misadventures of Nitro, Newt, Gordo, Stevil, and Weird Pete, a group of role-players in Muncie, Indiana. Like the Knights, the Black Hands represent a gamut of people we’ve all known at the table (though personally deny being), but with trouble and in-fighting turned up to 11! Yet, their adventures are still hauntingly familiar and always humorous reminiscence because, like it or not, we’ve all known (or been) gamers like them.

Weird Pete tries to get a ‘fly on the wall’

And Then Came Newt

An Army of None

The Black Hands experience one of the great battles of the 19th century.

Walk in the Park

A pixie-fairy adventure – and guess who’s the GM?

A surprise contender throws his hat into the ring.

As part of this special “director’s cut” PDF, a couple of scenes that didn’t make the print edition are included

Be the first to review “Knights of the Dinner Table: Black Hands 2010 Special #1 of 2 (PDF)” Cancel reply 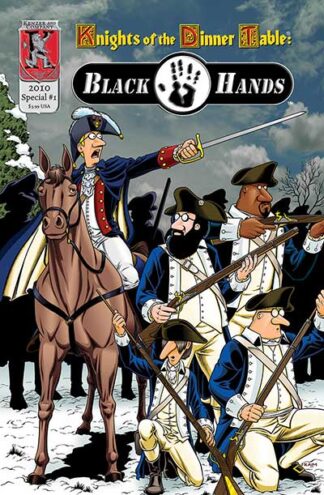