Known as “Sentinel City”, P’Bapar resides at the base of a wide mountain pass just over 10,000 feet above sea level. The city safeguards the only viable route though Coniper Gap and over the Legasa Peaks. The largest independent city-state on Tellene, 73,100 people live within P’Bapar’s city limits. Humans (Kalamaran, Brandobian and Dejy) comprise the majority of the population, but halflings, gnomes, dwarves and half-elves are common enough.Nestled in a large glacial ravine near the the tree line, the city spills down the length of the mountain pass along the banks of the Banadar River and up into the adjoining hills. Most of the forest and vegetation lies on the downslopes to the east of the city.P’Bapar is situated in a vital strategic position, controlling all traffic intent on crossing the mountains. Highly defensible, the archduke’s citadel overlooks the city and provides protection against any potential invasion; its towers can detect an approaching army for miles along the mountain pass. Beyond the city limits, the terrain is virtually impassable, particularly to the west. High mountain walls, ravines and canyons force travelers to use Coniper Gap in order to cross the mountains.The city is higher in elevation to the north and west, and tumbles downward along the valley floor towards the south and east. Six wards, defined by location and natural border, divide P’Bapar: North, High, Green, Lower, South and Outer.15 pages 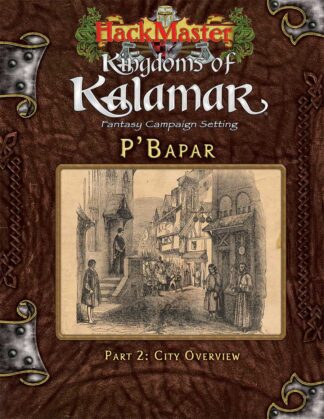