Since establishing independence from the Kalamaran Empire, P’Bapar has been a monarchy ruled by an Archduke. The current Archduke is E’Dos Kalanasi II, who aggressively rules his city while preventing representatives from the Golden Alliance, independent guilds, ambitious wizards, and powerful priests from outworking and outwitting him.E’Dos favors government ruled by an elite cadre and his administration is few in number. His advisors consist of several hand-picked representatives and a small council who double as administrators for some of the more essential functions of the city. This enables eachindividual to wield a great deal of authority and responsibility. The Archduke readily redistributes duties if a burden proves too great for one person. Beneath the Archduke is a caste system of titled ladies and noblemen who possess less authority, but govern various aspects of the city-state in the archduke’s name.17 pages 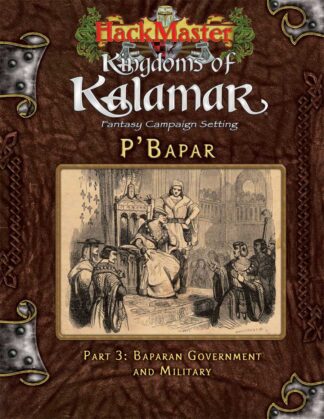