North WardThe North Ward is the northernmost district in the city, and a popular destination for locals and travelers alike. While the main avenues contain businesses that cater to travelers, the back streets of the North Ward are spared from most of the visitors. Locals have developed an independent spirit, though they remain welcoming.Four bridges cross the Banader River, linking the North Ward to the Green Ward to the south and west. The landscape forces the roads downward toward a narrow breach of buildings and streets, constricting access before entering the Lower Ward. When weather is bad or at peak times, the streets become congested with wagons, horses and foot traffic.An active place, tourists, travelers, mercenaries, merchants and adventurers pass through the North Ward on a regular basis. Shepherds, woodsmen, trappers, farmers and hunters come down from the mountains to sell wares or restock supplies. Those seeking commercial transactions can quickly enter the North Ward, conduct their business, and leave without having to venture into the deeper and more congested portions of the city.The influx of travelers attracts criminals, troublemakers and thieves to the North Ward. Taverns and inns are popular places for victims. Talons patrol the ward at regular intervals, though these guards are mostly active only from midday to midnight.Many guild leaders and merchants live here, but the majority of residents are low- to middle-class residents, such as artisans, laborers, guildsmen and tradesmen. Neighborhoods are relatively free of street gangs, but organized crime and guild thieves are never far away. The influx of travelers and commerce makes land expensive in the North Ward and particularly so along the busiest streets.Businesses in the North Ward cater to travelers, tourists and merchants arriving from the west to conduct trade. While the Eldan Marketplace in the Lower Ward draws most tourists drawn, shops and smaller markets in the North Ward do brisk business. Employment is plentiful. Sell-swords spend their treasures in taverns and gambling houses. Mercenary bands eager for new recruits ply the area. A young Baparan eager to make her mark on the world could do worse than starting here.Bluffs NeighborhoodLocals have nicknamed this portion of the city the “Bluffs” on account of the rugged terrain. As one moves away from the river the streets rise upward into the hillside. This creates a confusing mess of steep streets, narrow and constructed alleys and stairwells. Traversing the Bluffs is a cardiovascular adventure, made all the more treacherous in the rain and snow. Those venturing to the outer reaches of the ward are rewarded with spectacular views of P’Bapar.Since the Bluffs Neighborhood is often the first district encountered by travelers arriving from the west, businesses and merchants here are hospitable to travelers. Those living here have grown used to seeing new and unfamiliar faces. Although some long-time residents disagree with anything that disrupts their daily lives and therefore possess an attitude of elitism or disappointment about the influx of travelers. Luckily, these attitudes are limited to isolated groups of locals disinterested in the coming and goings of non-residents. The vast majority of Bluff residents welcome travelers, and their coins, with open arms.20 pages + separate map 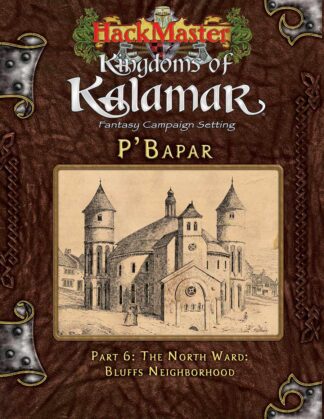