City DistrictsThe natural geographical features of the valley help split P’Bapar into several distinct districts called wards. Neighborhoods further subdivide the wards, each with its own distinct ambiance. Establishment of the wards provides an easy way for city officials to sub-divide the city for easy management. There are six official wards of the city. They are: the Outer Ward, the North Ward, the Green Ward, the Lower Ward, the High Ward, and the South Ward.Approaching P’Bapar from the NorthWhile travelers arriving from the south see the city rise up as they make their way along the gentle valley that precedes the city, those arriving from the north have P’Bapar thrust upon them.Several scenic vistas provide extraordinary views of the mountain valleys and waterways. A few farms struggle on the fringes of the northern valleys, hacking out potatoes, lettuce, spinach, arugula, chard and other hardy crops. Descending from the unforgiving mountain passes, travelers spy only fleeting glimpses of P’Bapar. Shepherds and miners working in the high places provide the first indication of the city’s proximity.At last, a line of buildings spring into view, the walls of city looming beyond. Respite is available in one of the wayside inns, but the nearness of the Outer Ward to the city walls allows many to forgo immediacy for shelterinside the city itself. Above the walls, the looming citadel watches over the pass.15 pages + separate map

Be the first to review “HackMaster – Kingdoms of Kalamar – P’Bapar 5: The Outer Ward (PDF)” Cancel reply 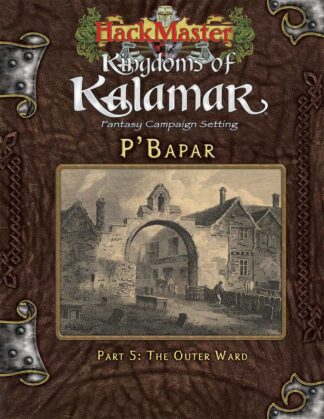