This is it – the definitive rulebook for the Kingdoms of Kalamar campaign setting, and a must have for players and Dungeon Masters of any D&D (v3.5) campaign. Not only is the Player’s Guide to the Sovereign Lands loaded with expanded and updated material, this 275-page searchable PDF supplement also includes a vast amount of new background details and game mechanics!Chapter One details 28 player character races, including a variety of humans, dwarves, elves, gnomes, half-elves, half-hobgoblins, half-orcs, halflings and hobgoblins! Also included are details on languages, naming conventions and other vital statistics.Chapter Two discusses the 7 variant classes, introducing the Basiran dancer, brigand, gladiator, infiltrator, shaman, spellsinger and watchman. This chapter also provides pages of new and helpful advice on making, playing and adapting each of these variant classes, as well as detailing daily life, organizations, sample encounters and more!Chapter Three presents 11 prestige classes, including the Alliance merchant, bounty hunter, dread slaver, golem master, living blade of Kotesh, muse, restorer, Sentinel of Providence, Vessel of Man, warlord and wavemaster.Chapter Four details a multitude of new Craft, Knowledge, Profession, and Speak Language skills, as well as new uses for existing skills and a variant language skill system!Chapter Five includes over 100 feats, including not only general feats, but also familiar, item creation, metamagic, psionic, regional and special feats!Chapter Six provides immense background for your character’s religion, with names, alignments, churches, favored weapons, symbols, and divine focuses! Also included are full details on religious canons, information on advancing within the ranks of the church, weapons of the deities, the divine right of kings, a wide variety of divine channeling powers, and more!Chapter Seven presents equipment, including alchemical mixtures, clothing, herbal concoctions, poisons, slaves (a common sight in some areas of Tellene), tools and related gear, 20 weapons, 8 types of ammunition, 13 armors, and a discussion of the coinage of Tellene!Chapter Eight covers combat, with information on 3 fighting schools, 9 career paths (with feat progressions), and 4 combat options (kick, shield disarm, throw, and unbalance)!Chapter Nine discusses adventuring in the Sovereign Lands, with an overview of the six major regions, their kingdoms, independent cities and known adventure locations. Also included are guides to travelling the roads and waterways of Tellene, as well as hiring transportation and purchasing lodging. This section also delves into common diseases and how to handle player character nobility in each land.Chapter Ten details 43 unique domains, over 125 spells, the scalable spell type, and discusses how the arcane spellcasters of the Sovereign Lands differ from those in other core D&D books.Chapter Eleven presents dozens of new magic items, including 18 magic armors and weapons (along with 12 new special abilities), plus over a dozen rings, rods, and staves, with 36 wondrous items and 6 cursed items, plus 4 artifacts!The Appendices cover the glossary, d10,000 place of origin tables for each race, and a player character record sheet designed especially for your Kingdoms of Kalamar character!Although easily converted for use in any Dungeons & Dragons setting, this book is designed to be used with the Kingdoms of Kalamar campaign setting – a realistic, dynamic world where complex political alliances mix with marauding bands of humanoids, and medieval technology and culture come faces to face with magic and the fantastic. Whatever type of adventure you seek, you can find it here.To use this campaign supplement in a Dungeons & Dragons v3.5 game, you also need a copy of the Player’s Handbook, the Dungeon Master’s Guide, and the Monster Manual. You can also find further detail on the Kingdoms of Kalamar campaign setting in the Kingdoms of Kalamar campaign setting sourcebook, the Kingdoms of Kalamar Player’s Primer and our many other fine sourcebooks and adventures.Note: Unlike the original 272-page Kingdoms of Kalamar Player’s Guide (v3.0), the 275-page Player’s Guide to the Sovereign Lands (v3.5) PDF contains no material reprinted from other D&D sources! That’s right, this release contains over 80 pages of information that never appeared in the 3.0 version, including all five hobgoblin subraces, tons of new information on the variant classes, the new watchman class and 43 unique domains, plus new skills, feats, weapons, armor, equipment, career paths, spells, and more! 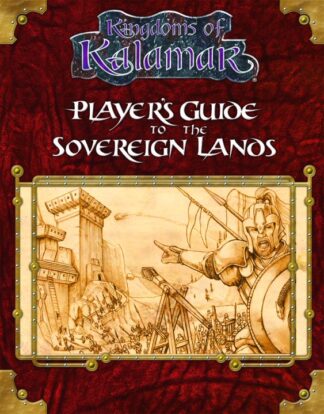 You're viewing: Kingdoms of Kalamar – Player’s Guide to the Sovereign Lands (PDF) $19.99
Add to cart