Here, creatures of dark evil roam the lands in search of prey, while others rule a terrified populace from the safety of their throne rooms. Meanwhile, elven warriors battle expansionist human kingdoms to protect their forest homes, dwarven slaves plot the overthrow of their human conquerors, and the armies of hobgoblin kingdoms grow increasingly powerful. Ruins of ancient empires lie buried beneath burning desert sands, and their stories told in smoky back rooms attract brave fools eager for excitement and quick wealth. The streets are full of the brave and foolhardy, eager to draw steel and strike for little cause, and war between kingdoms is a constant occurrence. The courts of the nobility also hold mystery and intrigue, provided one can master social pressures greater than the threat of a giant’s club or a dragon’s fang…This special edition of the Kingdoms of Kalamar fantasy campaign setting is a must have for players and Dungeon Masters of any 4E D&D® campaign. Not only does this 501-page PDF work with 4E D&D® classes, races, monsters, and more, but it also includes expanded background details, new game mechanics for 4E, and an incredibly detailed full-color atlas! No matter what game system or edition you’re using, this book gives you an incredible mine of information and adventure ideas!BOOK 1: CAMPAIGN SETTING SOURCEBOOK (pages 1-275):The Introduction covers the basics of the Kingdoms of Kalamar campaign setting and the world of Tellene, along with information on how to use this book, a two-page map of the setting, quick reference page numbers for the 50+ new game mechanics that appear throughout the book, and a brief guide to where the D&D® classes usually appear on Tellene.Chapter One: Races of Tellene details 28 different subraces (humans, dwarves, elves, gnomes, half-elves, half-hobgoblins, half-orcs, halflings and hobgoblins). This chapter even suggests rules variants for the humanoid subraces! Also included is information on the climate, religions, warfare and technology, road travel, water travel, and cities and towns!Chapters Two through Seven discuss the setting’s six regions (Brandobia, the Kalamaran Empire, the Young Kingdoms, the Wild Lands, Reanaaria Bay, and the great Isle of Svimohzia), along with a full color map of each region, a brief history, a detailed history, descriptions of kingdoms (and theocracies, city-states, principalities, and so on), and their important cities and towns. Each city or town includes details on its population, overview, government, economy, military, temples, mages and sages, underworld, interesting sites, and special notes.Chapter Eight: Independent Organizations presents several independent groups with influence over the population, including the slave-freeing Brotherhood of the Broken Chain, the oft-greedy Golden Alliance merchant’s guild, the evil, power-hungry Secret Network of the Blue Salamander, and several more!Chapter Nine: Languages details the naming conventions and languages of each major human and humanoid race.Chapter Ten: The Gods of Tellene includes descriptions of each of the setting’s 43 deities, whether good, unaligned, or evil. Each listing includes details on the deity itself (such as racial names, nicknames, spheres of influence, alignment, and symbol) and on the church and clerics (holy symbols, holy days, raiment, friends and allies, enemies, places of worship, advancement within the church hierarchy, and more). This chapter also includes a special Channel Divinity feat for each cleric’s faith, designed specially for this edition!The Appendices A through E cover the celestial bodies, calendar, constellations, the laws of cities, the Kalamaran Imperial Legion, quick-reference charts, NPCs, and a pronunciation guide and glossary!BOOK 2: KINGDOMS OF KALAMAR ATLAS (pages 276-501):Done in the useful style of a scholarly real-world atlas with plenty of full color maps, graphs, charts, illustrations and indexing, this section details the essential nature of the Kingdoms of Kalamar fantasy campaign setting. Take one look and you’ll realize that this is a book for the ages. This section includes:- Detailed topographical maps in full color- Maps of coastal currents, seasonal winds, climates, terrain and vegetation definitions- Resource maps depicting each nation’s industrial and wealth concentrations, raw materials, imports and exports, military deployments and dialect languages- Locations of roads and trade routes- Mapped locations of cities, towns and villages, with a convenient index giving the exact coordinates of eachTo use this campaign setting in a 4E D&D® game, you also need a copy of the Player’s Handbook, the Dungeon Master’s Guide, and the Monster Manual. You can also find further detail on the Kingdoms of Kalamar fantasy campaign setting in our many other 3.5E D&D®-compatible products. 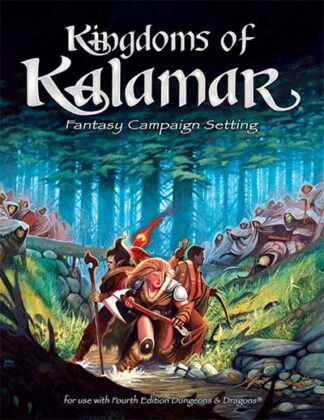