THIS PDF NOW UPDATED FOR D&D v3.5!Over five hundred years ago, he came down out of the Elenons at the head of a fearsome army of hobgoblins. For 13 years, he terrorized Brandobia and what we now know as The Young Kingdoms. After his assassination, the tribes he had united fell to civil war over who would be his successor. Luckily for the rest of Tellene, none succeeded. For he was Kruk-Ma-Kali, the greatest king of the hobgoblins and one of history’s mightiest warlords. Rivers of gold, floods of silver and wagonloads of magic flowed into his treasury for over a decade. They say the treasure hoards of Kruk-Ma-Kali rivaled those of the Kalamaran Empire at its height. They say his most loyal followers took the greater portion of it for his Tomb. They say it lies there still, waiting for those who that can prove their worth by overcoming the many obstacles left to guard the treasure.For centuries, adventurers, glory-seekers and gold-hungry dreamers have sought the mysterious Tomb of Kruk-Ma-Kali. Serious-minded scholars now speculate that his Tomb is a myth. But rumors never die, and the lure of the Lost Tomb continues to draw those who believe that they can overcome the deadly trials and reap the magnificent rewards. Deep in the dusty stacks of the Great Sanctuary of Knowledge at Dijishy lies a journal…a tome written by an adventurer who has actually seen the Tomb entrance. The Tomb is real. But only an intrepid band of characters prepared to face the horrors and deadly tests left for them can locate the Tomb and discover the treasure waiting for them…Like all Kenzer and Company products, this adventure was designed with the Dungeon Master in mind. We prepare all the details so you can spend less time flipping pages and more time gaming. Being a DM has never been so easy, or so much fun! Here’s some of what you get:• 112 pages of useful background, NPC information, maps, encounter tables, artwork and adventure details!• Details of the Great Sanctuary of Knowledge, the oldest library on Tellene and itself a potentially endless source of adventures!• Information on the region of the Great Valley in the Elenon Mountains, an area with a unique political and social structure that can serve as a mini-campaign setting!• Details of the long sought after Lost Tomb of Kruk-Ma-Kali itself, complete with enough tricks, traps and monsters to challenge characters and players!• New spells, monsters, templates and magic items!• ImageQUEST™ Adventure Illustrator. “Because a picture is worth 1000 words.” ImageQUEST is the picture book that gamers love. Now DMs can not only read the boxed text, they can actually show it to the players.Although easily converted for use in any campaign setting, this book is designed for Dungeons & Dragons v3.5 and the Kingdoms of Kalamar campaign setting – a realistic, dynamic world where complex political alliances mix with marauding bands of humanoids, and medieval technology and culture come faces to face with magic and the fantastic. Whatever type of adventure you seek, you can find it here.To use this adventure in a Dungeons & Dragons (v3.5) campaign, you also need a copy of the revised 3.5 edition Player’s Handbook, the Dungeon Master’s Guide, and the Monster Manual. You can also find further detail on the Kingdoms of Kalamar campaign setting in the Kingdoms of Kalamar campaign setting sourcebook, the Player’s Guide to the Sovereign Lands PDF and our many other fine sourcebooks and adventures.• For 8th to 14th-level characters. 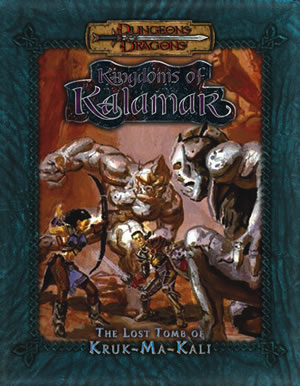 You're viewing: Kingdoms of Kalamar – Lost Tomb of Kruk-Ma-Kali (PDF) $7.99
Add to cart