Harshaw Creek differs from the previous Aces & Eights town settings in that it is designed for ‘drag and drop’ play. That is, it’s up to the Gamemaster to decide where the town is specifically located in his or her

This makes the supplement immediately useful, both to GMs starting new campaigns (who may not be up to speed on the setting as a whole) as well to those GMs who wish to use it with an existing or on-going campaign — by placing it in an area in which the players are already based.

The town is small and relatively new, with little economic or political impact on its neighbors so it lends itself well to this sort of approach. And although the authors have provided a brief history of the town, the GM (as always) is free to dispense with it entirely, or in part. This is your sandbox.

Fifty-six fully fleshed out NPC character sheets have been provided. These include every resident of the town as well as a multitude of NPCs who might arrive as mere passers thru, potential investors, flim flam artists, etc. They’re all characters ready to interact with players.

Featured personalities include the narcoleptic undertaker (who was once nearly buried alive after being proclaimed dead by the town barkeep) to the unassuming drifter with a dark past (and a price on his head) who recently hired on to sweep the stables.

Finally, you’ll find more than a dozen suggested adventure hooks and rumors, meant to inspire both the GM and players.

Two town maps have been provided. One with a location key, and one without (player map). It should be assumed that there are residences and farms beyond the edges of the map.

So, saddle up a sassy mare, dig in those spurs, and head on over to Harshaw Creek for a whiskey at the Lonely Peso and a few rounds of Faro. 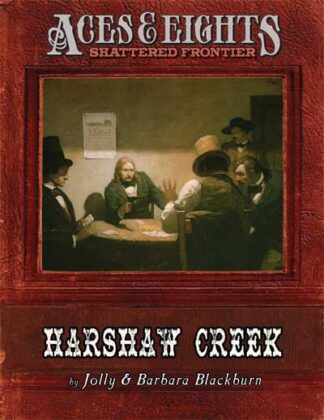