Take the reins of the Shattered Frontier’s freight, express, and passenger service. In this place, monopolies are legal and encouraged by the various governments. Go west where wheeling and dealing lead to racing and rollovers, partnerships and takeovers, bonanzas and bankruptcies. Visit a place where fare wars and dust storms, horse thieves and deadly disease, sagebrush and gold rush are a daily event. Meet the movers and shakers, dreamers and fakers who link frontier outposts to the various nations of the Shattered Frontier world, steamboat landings to remote mining districts, Confederate States to Texas and the Union, Back East to Far West. Play your cards right and you could be the crack reinsman who becomes a millionaire president, the country kid who becomes the Napoleon of the West, or the Master of the Lash who becomes the Stagecoach King!

Stagecoach King can be used to simulate the weekly events of the Stagecoach Driver Profession Path within Aces & Eights: Reloaded or as a standalone game. 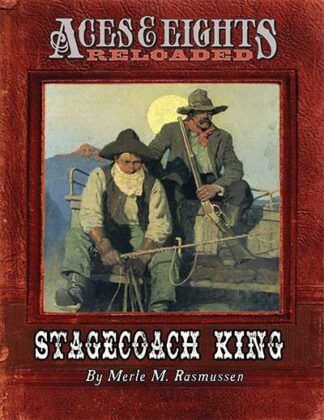