Trouble on the Sequoyah Star is an innovative Aces & Eights adventure played out on board a passenger train heading down the tracks toward a date with destiny — with those aboard obliged to ride along toward their fate.For every GameMaster who’s ever wanted an adventure designed for easy adaptability, this is it. Three factions each with their own agenda (Confederate zealots, Texas Rangers, and Pinkerton detectives) provide three different adventure opportunities, combining with multiple play options (player vs. player, or player vs. GM) to allow participation for groups with as few as two players or more than a dozen. Plus, unlike other games, where nothing happens until the players get to a certain point, events start to unfold from the moment the players step on board the train. A detailed, easy to use timeline keeps the non-player characters moving along their own paths even when the player characters aren’t around; your players must decide who to interact with as well as where to go and what to do, while the time ticks by and the Sequoyah Star nears its final destination…Trouble on the Sequoyah Star also includes:- full color maps of each of the 13 train cars, elegantly designed for use with your western miniatures- 16 detailed non-player character sheets in Rustlers & Townsfolk format- regional maps- train ticket handouts- rules of the rails (falling damage, speed and accuracy, goals, awards, movement rates, and more)(48 b&w pgs plus 12 color plates, shrinkwrapped 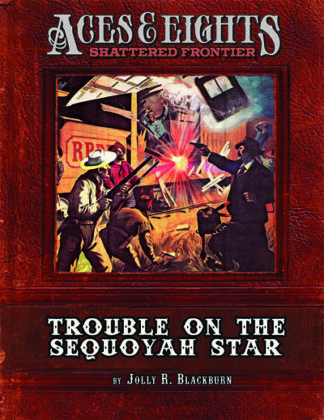