In 1927, Keziah Jones, a little-known witch from Slurry decided to look into the old legends of the wee folk. Being a very studious practitioner, her efforts at summoning them were quickly successful. They were also a bit disappointing, as the fairies summoned were nothing more than mad, feral creatures. The discovery was of little use to her, and while interesting, she simply dismissed it as a curiosity and went back to creating little crop circles on the neighbors’ lawns.Her utterly mad daughter Iowa, on the other hand, saw much potential in the little creatures. She played with, manipulated, and dissected lots of the little buggers, and she documented her findings in the now notorious spellbook, Faeries and their Kynde. The book spread slowly among both solitary and traditional practitioners, and relationships between fairies and Witches began again. The fairy path, albeit more than a bit twisted, was reborn.This 38-page Fairy Meat supplement includes 32 pages of all the rules you’ll need, along with many printable color sheets of weapon counters (such as the bloodseeker, hate blade and ritual knife), Pixiegeist counters, Shadow Fairy counters, Jinx counters, Life counters, Kill counters, and Twinkle counters. Although Wicked Things is fully compatible with Fairy Meat, it is a supplemental rulebook only. Unless you already know how to play, you will need the Fairy Meat core rulebook in order to play effectively.In Wicked Things, Witch Fairies, Blood Fairies, Leperchauns and Crickens enter the scene! Check out the most disturbing (and disturbed) fairies yet! With bat wings and other hideous body modifications, they roam in the land in search of tasty fairy morsels to deliver to their witchy masters.Discover the strange and magical un-fae (Pixiegeists and Shadow Fairies) that the Witch Fairies conjure into battle to do mischief and wreak havoc! Learn of the secretive Cricken – and their strange relation to the rest of the wee folk. Have a rotting good time with the irascible Leperchauns (yes, LEPERchauns)! Let your deliciously wicked imagination take your game to new heights! 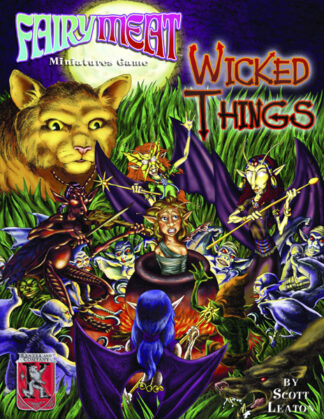