THIS TIME IT’S WAR!Long, long ago, in the deepest depths of a dark age Big People call “the Eighties,” a rebellious pack of Moon Fairies concluded that the fairy life wasn’t quite as nice as it used to be. They looked around at the violence and addiction that filled the fairy world, and were saddened by it!”All dis rotten Meat stuff and Pink stuff,” they would often say, “has been killin’ our ol’ school fairy kind-ness. We ought to knock it all off – quit the Meat and the Pink.””The others ain’t gonna like that much!” a second pout-lipped fairy was heard to say. “They like their killin’ and eatin’ and kissin’ the dead.””Let’s quit them others, then, an’ do things ourselves like they oughta be done!” said a third fairy, waving her little fist and preparing to unleash a very clumsy slogan. “I say, if you wanna stop the killin’, you gots to get to killin’ all the killers first.”And kill they did – more or less! Calling themselves the “New Wayers”, these rambunctious little ragamuffins marched straight to the gates of the Lunar Palace, and began their angry revolution right then and there. The righteous face-stomping and wanton wand-blasting was all going quite well until the Moon Queen herself showed up on the scene, and the New Wayers were (if you’ll pardon the pun) royally trounced. Fearing for their sanity-addled heads, the few surviving Straightedge Rebels (as they came to be called) fled to the wild places of Earth. Here they have remained, hidden and unknown, secretly assembling an army and growing in power until that fateful day of bloody, righteous meat-free revolution!To the dismay of fun-loving fairies everywhere, that “fateful day” was last Wednesday.In War, Straightedge Fairies, Greater Fae, Goblikes and Imps enter the scene! With amber armor, sunflower bombs, pistols, rifles and other dangerous weapons, the Straightedges bring squad-based war to the fairies! Goblike mercenaries strengthen this army (when they’re not busy eating it), and Imps and Greater Fae likewise enjoy the new state of fairy affairs. After all, in the old days, it was frowned upon to senselessly riddle another fairy with a hail of arrows!Even better, this 32-page Fairy Meat supplement features new rules for establishing ongoing campaigns! With skill points, your faires can learn as they kill and become tougher than ever! This book also includes rules for Fame, new printable warband and squad sheets, and much more! Although War is fully compatible with Fairy Meat, it is a supplemental rulebook only. Unless you already know how to play, you will need the Fairy Meat core rulebook in order to play effectively. 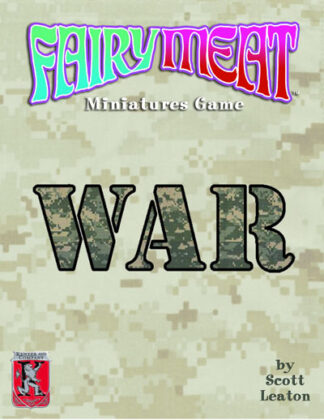