Whether you profess to be the greatest pixie fairy adventurer in the Wurld, or need to gird yourself for battle with a swarm of these elusive faerie folk, this HackMaster™ 4th edition book is for you! What you hold in your hands is the codex that will guide your quest for knowledge like a brilliant beacon amidst a coastal storm. This tome will assist your rise about the petty humans, dwarves, elves and other land-bound races you’ve ever met. This thoroughly researched and finely detailed reference work includes everything you ever wanted to know about the masters of the air. Here’s just a sampling from the inventory of secrets revealed herein:

– 13 new classes, including the Animalist, Arcanist, Eater of Love, Fellow of Fear, Friend of the Wee Folk, Keeper of Oaths, Lovewing, Lustlord, Messenger of Light, Minister of Death, Soldier of Faerie, Trickster, and Wavesong.

– 44 new magical tattoos and power runes, plus full details and clarifications on the special Emphkrin tattoo.

– New pixie fairy priors and particulars, including details on clans and places of origin.

– Details on available packages and personalities, including the new Amber Guard package.

– Detailed analysis about pixie fairy life, including social structure, military forces and tactics, and pixie fairy practices of courtship, religion, trade and tribute, recreational habits, the Pixie Meet and a myriad of other subjects.

– Descriptions of the Faerie Realm and the capital city of the pixie fairies, Croatoor. 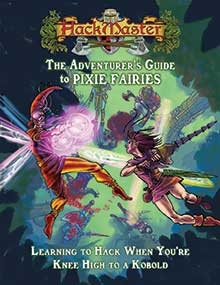