You are about to add one of the most useful GameMaster tools ever devised to your arsenal. Your players will soon quake with fear when they learn you are now able to resolve combat quicker and more efficiently than ever. With less table flipping and rule consulting, you will find your new HackMaster™ 4th edition Combat Wheel™ conflict resolution device allows you to deal out more hurt on your players. With less time spent computing base severity levels and to-hits, you can now concentrate on the important things — kicking player character ass.Side 1 of the Combat Wheel game tool has several useful features. On the outer edge of the circles on side 1, is a box marked “Initiative Notes”. At the beginning of each battle, you can use a pencil to mark the initiative value for each character or for just the creatures under your control. To the right of the Fatigue box is an area that provides data for weapon type vs. armor to-hit modifiers. By turning the wheel, the applicable to-hit modifiers for each weapon type are then shown in the three windows below the particular armor type window.The series of boxes on the outer rim located to the right of the weapon type to-hit modifiers are intended for you to record the armor class associated with a specific creature. Record the name of the defender (whether it is a player character or a monster) in the box next to its armor class number. Likewise, you should record the name of the attacking character or creature in the box on the inner circle next to the letter code that represents that creature’s character class and level or hit dice in the case of monsters.In order to determine the number required for a character to hit a particular armor class, rotate that character’s name on the inner circle to the armor class he is attempting to hit on the outer circle. Once the character and the target armor class are aligned, read the number inside the “To-Hit” window. This is the number that the PC or monster needs to roll on a d20. The window directly below the “To-hit” window indicates the number required to hit a character’s particular type of shield – if he is using one.The final feature on this side of the Combat Wheel is the Critical Hit Base Severity Level box, marked “Base Severity Level”. When someone scores a critical hit, you can determine the base severity level by following the steps outlined in the Base Severity Level box.Side 2 of the Combat Wheel game tool also contains data for saving throws for both items and creatures. In order to find the required saving throw number, rotate the wheel until the appropriate character class for the person making the saving throw and the applicable hazard requiring the saving throw are shown in the outermost window. The data for item saving throws can be retrieved in a similar manner.This 10-page PDF includes each full color component, as well as detailed instructions on how to construct and use your own HackMaster™ 4th edition Combat Wheel to deadly effect. Just print, assemble and terrify your players with your new acumen! 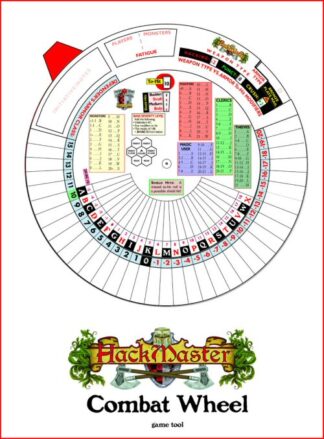