Baurgar’s Prize is an adventure centering around a cave (the Ma’Kurun Caverns, hidden among the deep ravines of the Sadok Forest of Aldrazar) that is occupied by a bugbear splinter group who have peeled away from their band after a period of infighting. It can be easily dropped down into pretty much any remote forested area by simply disregarding the backstory or making minor changes.The GM should note that this adventure reflects the author’s fondness for allowing players to wade in over their heads if their actions so dictate. Life isn’t always fair and balanced. Some encounters can’t always be tackled with brute force and spell lobbing. As such, Challenge vs. Party Level isn’t strictly by ‘the book’.*Depending on the party (and your players), they may be confronted with the realization at some point, “Dudes — we need to pull out!” There’s no shame in having to regroup, recruit allies to help with the challenge, or — simply deciding to move on. Here’s hoping it doesn’t come to that.If things do turn south for the group, there are ample opportunities for them to withdraw, lick their wounds and try again (unless of course they push too far before taking advantage of those opportunities). Although a recommended party level has been given (6th to 9th level), the adventure deals with a dug in enemy that is expecting trouble in a big way and have been preparing accordingly. The GM should feel free to ramp up or shave down the challenge level as he deems fit. Suggestions for this and more can be found in the GameMaster’s War Room appendix.Includes a new monster, a new magic item suite and several personality writeups as well as an epilogue that provides for additional violence.30 pagesVirtual Table Top PackWith the popularity of virtual table top role-playing (on such platforms as Maptools, Roll20, D20 Pro and Battlegrounds), Baurgar’s Prize contains a VTT PACK. This packet includes all the tokens for NPCs and monsters in the adventure as well as the full color maps (labeled and unlabeled, which can be uploaded and used in the game.*Editor’s note: the author’s fondness is reflected in the rather broad suggested character level rating.

Be the first to review “HackMaster – Bauger’s Prize” Cancel reply 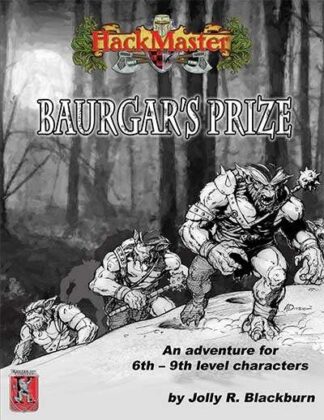