The resultant peel of thunder like the crack of a whip sends a murder of crows skyward. Beyond the open, waving grass, looms a dark and imposing structure of stone and wood. P’Rav’N is the name on the deed, but the locals all called it “Valravn Mansion” with whispered words and surreptitious glances over their shoulders when you inquired about it at the last village two days ago.Those few residents who would speak of it told tales of foul murders and horrific deaths. Some spoke of winged silhouettes in the sky at night. A second strike of lightning turns the black sky bright and for a moment you thought you saw movement on the rooftop. A scream pierces the air, but it is quickly drowned out by the rumble of thunder. Did you just imagine that, or is your imagination getting the better of you?In Act I of Valravn Mansion, your players will explore grounds overrun with undead while trying to gain access to the manor. In Act II, now inside the mansion, they will discover signs of gruesome murders as they attempt to solve the mystery of a murder long forgotten. Finally, in Act III, players will be challenged to tell truth from lies as they piece together all that they have learned and use that knowledge to root out the true evil that lies within the mansion.Valravn Mansion is a murder-mystery adventure for the HackMaster role-playing game that is designed for 4-6 Player Characters who have achieved level 12-14. The three parts of this adventure are enough to fill hours and hours of gameplay. 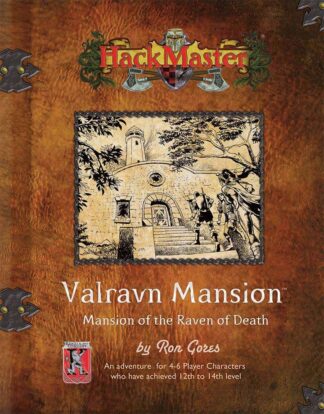