Four days ago, the village of L’Mindu (on the Kalamar-Dodera border) was attacked by the Snakehead Band. Two ogres smashed down the town’s gate and orcs poured in behind them. During the short battle, the orcs managed to carry off nine people and quite a bit of livestock. The villagers killed four of the orkin invaders, but not before losing twenty-four of their own people (mostly noncombatants) in the melee. Many of the survivors of the attack report that the apparent leader of the raid carried a shield painted with the face of a screeching, snake-haired woman.When PCs arrive in L’Mindu, they will notice that the gates have been broken down and many of the town elders approach the PCs asking them to take revenge on the orcs and to bring back physical proof of their deaths.”The creatures came out of the northern hills. A hunter from our village was able to track them to a cave there. We believe this is where they lair. In the past, the soldiers of Dodera have assured us that they have ended threats to our village when nothing has been done. The people of this village are afraid. I am sorry to ask it, but could you bring back proof that you have slain these creatures? Some token of your victory so that we may set the hearts of the village at ease?”This short adventure is small enough to be completed in one session by a group of 8th-9th level characters.10 (very dense) pages plus cover 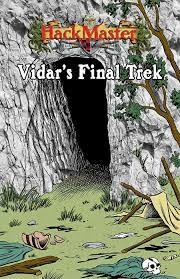