THE DEAD ARE RISING… AGAIN.Over three hundred years ago, the wise and beautiful Queen Simura lost her only love to a horrid disease. In a desperate attempt to restore life to her beloved Gallanos, the Queen turned to necromancy, and became seduced by the evil power of a mystical tome: the Darklight Codex. Constructing a gigantic maze beneath her palace, the Queen began to gather followers, as the dead throughout the land began to rise. Suddenly, a fanatical group of warrior-priests attacked the palace, and succeeded in sealing the Queen and her followers within their own stronghold. As time passed, the city crumbled, and to most people the story of the Queen is now only a legend. But a small group of evil priests have discovered the truth and are determined to breach the seal and claim the Darklight Codex for themselves. Now terror grips the land – children are being kidnapped, plague is spreading, and the dead are rising again. And deep beneath the palace ruins, in the heart of the maze, the Queen begins to awaken from her long sleep, her power even greater than before.While in the Principality of Pekal, the heroes become isolated from the surrounding world by a combination of disease quarantine and undead activity. Adventurers will face their darkest fears, as they become entangled in an investigation of ancient evils, unhallowed life and sudden death. This accessory provides characters with a chance for several types of adventure: wilderness, town, and dungeon. Set in a small area on the southernmost shore of Eb’Sobet Lake, your players will be embroiled in a tale of madness, kidnappings, murder, and undying love. How will they manage to survive even one of the many dangers that await them?Like all Kenzer & Company products, this adventure was designed with the Dungeon Master in mind. We prepare all the details so you can spend less time flipping pages and more time gaming. Being a DM has never been so easy, or so much fun! Here’s some of what you get:- 80 pages of useful background, NPC profiles, maps, encounter tables, a full glossary, artwork and adventure details; no fluff!- Player aids and handouts that your group is sure to enjoy.- Details on the history and legends surrounding of southern Brandobia where the players will be exploring.- Includes 2 new prestige classes, 2 new monsters, 1 new disease, 1 new magic item, and 1 new spell!- ImageQUEST Adventure Illustrator: “Because a picture is worth 1,000 words.” ImageQUEST is the picture book that gamers love. Now DMs can not only read the boxed text, they can actually show it to the players.- All done in the quality you’ve come to expect from Kenzer & Company.Although easily converted for use in any campaign setting, this book is designed for use of Dungeons & Dragons rules with the Kingdoms of Kalamar – a realistic, dynamic world where complex political alliances mix with marauding bands of humanoids, and medieval technology and culture come faces to face with magic and the fantastic. Whatever type of adventure you seek, you can find it here.To use this campaign supplement in a Dungeons & Dragons campaign, you also need a copy of the Player’s Handbook, the Dungeon Master’s Guide, and the Monster Manual. You can also find further detail on the Kingdoms of Kalamar campaign setting in the Kingdoms of Kalamar campaign setting sourcebook, the Kingdoms of Kalamar Player’s Primer and our many other fine sourcebooks and adventures.For 8th to 9th-level characters. Although originally designed for D&D v3.0, Deathright can easily be adapted for older or newer editions by any Dungeon Master with a little experience. 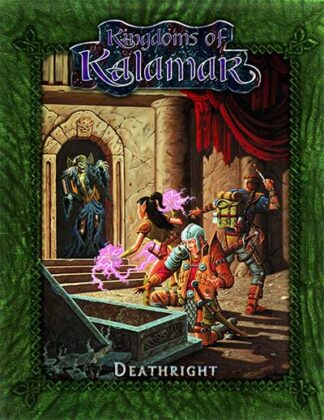 You're viewing: Kingdoms of Kalamar – Deathright (PDF) $7.99
Add to cart