Kingdoms of Kalamar – Friend and Foe: The Elves and Bugbears of Tellene (PDF)

Kingdoms of Kalamar – Friend and Foe: The Elves and Bugbears of Tellene (PDF)

Elves and their foes have enthralled readers for ages – now find out why. This 224 page searchable PDF contains detailed information on the surface elven and bugbear races of Tellene, including history, culture, religion, social structure, subraces, and more! Designed for D&D v3.5, this supplement is an invaluable resource on all things elf and bugbear, and usable by players and Dungeon Masters in any D&D campaign setting.

ELVES: Elves have long been a part of fantasy, and their unique blend of sorcery and combative arts makes them a popular character choice for countless players. This supplement serves as a player’s guide to elves, with a wealth of background information enabling you to bring your characters to life in a unique culture, as well providing new rules, including feats and prestige classes.

The elf section is broken down into several chapters, one for each subrace. As the high elves most closely resemble the standard elven race in the D&D Player’s Handbook, and because the high elves are the race most commonly encountered by the humans of Tellene, they are treated as the standard elven race. The differences between subraces highlighted in the other chapters, each of which is broken down into several sections, covering various aspects of a surface elf’s daily life. Subterranean elves (dark and twilight) are covered in the Blood and Shadows supplement.

Chapter One details the history of the elven race.

Chapter Three presents the gray elves, studious and haughty creatures who live in stone cities and do not consider other races their equals.

Chapter Four details the wild elves, a reclusive and belligerent subrace of communal hunter/gatherers that favor freedom over all else.

Chapter Five includes the wood elves, protectors of the forests with a strong love of nature.

Chapter Seven presents the player with everything he needs to know about playing any breed of elf, as well as new feats and prestige classes suited to the various races.

The Appendices (A and C) cover the elven glossary and bestiary, respectively. Appendix E includes some notes for the Dungeon Master on elven adventures.

BUGBEARS: Bugbears, too, have been spotted in fantasy campaigns for many years, but serve mostly as growling, snarling beasts with no real society of their own. This supplement changes that, providing DMs (and players) with ways to bring a bugbear character to life! Here you learn about their physical and mental strengths and weaknesses, social structure, culture, warfare, religion, and more.

Chapter Eight details the monstrous bugbear race, along with the arctic and desert subraces, and the bugbear mage.

Chapter Nine gives details on playing a bugbear, along with new rules information pertaining to bugbears, such as prestige classes and alchemical mixtures.

The Appendices (B and D) detail the bugbear glossary and bestiary, respectively. Appendix E includes some notes for the Dungeon Master on bugbear adventures.

Be the first to review “Kingdoms of Kalamar – Friend and Foe: The Elves and Bugbears of Tellene (PDF)” Cancel reply 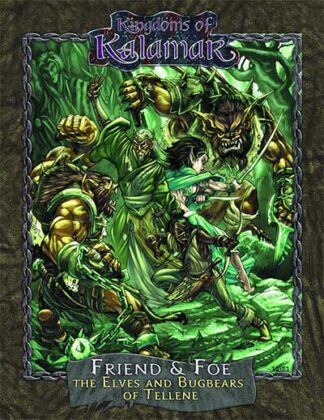 You're viewing: Kingdoms of Kalamar – Friend and Foe: The Elves and Bugbears of Tellene (PDF) $14.99
Add to cart