View cart “Kingdoms of Kalamar – Strength and Honor: The Mighty Hobgoblins of Tellene (PDF)” has been added to your cart.

Imagine, if you will, the lands of Africa some two to three thousand years ago, but with cities and cultures that rival Ancient Rome for their glory. Now, in your mind’s eye you have a glimmer of what is Svimohzia, a land of diverse cultures, shining cities, terrifying dangers and ancient wonders. This is a land unlike any other – and a land that’s waiting for you.This 256-page hardcover contains all the details you need to play Dungeons & Dragons v3.5 adventures in this setting, including:- Races and Regional Feats! Discover the variety of player character options for human, humanoid and monstrous races (including half-gith, half-gnoll, lizardfolk, and plains minotaurs), and build your character with over 23 feats! Whether you hail from the massive hobgoblin kingdom of Ul-Karg, one of the four vast human kingdoms, a savage human or humanoid tribe deep in the Vohven Jungle, or other mountainous, wooded or subterranean region, this supplement allows you to create and equip any character for endless adventures in this incredible setting.- Classes and Paths! With details about 17 different classes, and 12 career paths with feat progressions, easily customize your character, whether hero, villain, warrior or scholar!- Prestige Classes! Become a Disciple of Zhulurahn, a ferocious Meldiz savage, a transforming primal warrior, a vigilant savannah stalker or an elite Sedizehn killer!- Weapons, Armor and Equipment! Equip your character with a wide variety of weapons, tools, armor, musical instruments, mounts, ships and other special items found herein!- Spells and Magic Items! Unlock the arcane power of cheetah’s speed, nemesis, Onahu’s cloak of courage, and over a dozen other new spells!- Detailed Kingdoms, Towns and Cities! Along with information on each kingdom’s history, rulers, noble houses, topography and other details, you’ll discover dozens of cities, all with information on population, government, economy, temples, underworld, interesting sites and more!- Culture and Society in Depth! Learn about each land’s nobility, social castes, military forces, religion, clothing, culture, diet, trading practices, recreational habits, architecture and more!- Easy-To-Use Quick Reference Sections! Whether you need a new name for your character, a listing of noble houses, or how to pronounce and translate an unknown word, these sections give you the information you need.- Monsters and NPCs! This ancient land can be quite dangerous for the unwary, and some of its terrors lie in wait for you here!- Adventure Hooks and Tips, Detailed Maps of Svimohzia and Much More!Although usable in any campaign, this tome is especially suited for Dungeons & Dragons adventures in the Kingdoms of Kalamar campaign setting – a realistic, dynamic world where complex political alliances mix with marauding bands of humanoids, and medieval technology and culture come face to face with magic and the fantastic. Whatever type of adventure you seek, you can find it here.This Kingdoms of Kalamar supplement is intended for use by D&D players and Dungeon Masters (DMs) alike. To use this accessory in a Dungeons & Dragons campaign, you need a copy of the D&D Player’s Handbook, the Dungeon Master’s Guide and the Monster Manual. You can also find further detail on other lands within the Kingdoms of Kalamar campaign setting in the Kingdoms of Kalamar campaign setting sourcebook, the Kingdoms of Kalamar Player’s Primer, or any of our other fine supplements and adventures.

Be the first to review “Kingdoms of Kalamar – Svimohzia: The Ancient Island” Cancel reply 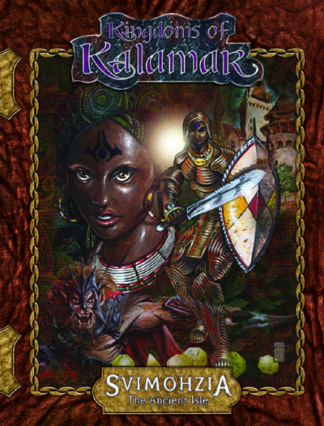