The young logging town of Drhuyl is a rough and violent place ruled by loggers, ranchers and fishermen. Outsiders are not much trusted, and are generally given a hard time. All the landed interests in Drhuyl are Fhokki, and non-Fhokki are openly discriminated against, if not physically abused.Most common goods may be bought in Drhuyl, though luxuries and things of rare origin are found only by chance. The town enjoys able tradesmen that can mend or make most anything under the purview of their craft.There is much of beer, liquor, gaming and whoring in Drhuyl. The two main beer-halls are rough and violent places where most of the men spend their hard-earned money. The bathhouses, owned by the Rolff family (see below), are also brothels. The water is brackish and lukewarm, and the sounds of patrons being serviced by slave women can be heard from as far away as the central court turnabout. Of course many customers aren’t above getting a bob in public, perhaps in the washing yard or in the bathhouse itself, as a room costs as much as acluusti (also said to be the going rate for that service).For those needing coin, there is usually work in the stables and cattle yard, especially when herds are moved in and out. The Jodlutt Forest is said to still be rich in fur-bearing animals, though it is quite untamed and shows sign of increased Orc activity. Armsmen can almostalways find work out of Drhuyl protecting merchant caravans headed up the Western Road to Ormyn. Cattle merchants sometimes hire as much as a dozen armsmen at a time to protect their herds on western-bound journeys to places like Dhrurkk and Dhreth. Free-warriors also use Drhuyl as a staging point for scalping expeditions into the middle Jodlutt Forest.Scalps can be exchanged for coin anywhere in Drhuyl, though prices are about fifty percent less than in Narr’Rytarr. The Rolff family is said to claim a twenty-five percent cut off all scalp transactions in the town, one of the many rights the family guards with jealous brutality.Drhuyl is located within the Middle Plains of DrhokkerProduct includes PDF and high resolution (3000 pixel) map. 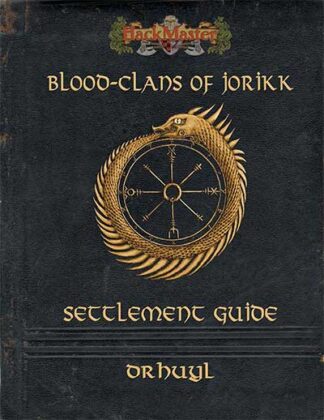