HackMaster – Legacy of the Elm King

HackMaster – Legacy of the Elm King

The fertile lands around Vew are undergoing a major population surge! Folk flock to the woods and dales around the town to build homesteads and raise families in this land of opportunity. Far away from the safety of Vew and its town militia, these new arrivals eke out an existence near the edge of the wild… and the creatures that inhabit it. In Legacy of the Elm King players venture out into the half-wild lands to explore the new communities that have grown up in secret beyond the reach of the P’Baparan government and its laws.

Legacy of the Elm King is an adventure for 4-6 HackMaster characters of level 3-4. It is set in the Frandor’s Keep setting and builds upon events that unfolded in the adventure In the Realm of the Elm King though it is not necessary that the PCs have explored that scenario. 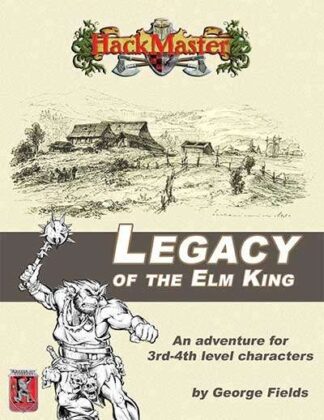