A mere year past Cosolen was a genteel city in which the arts flourished. A terrible natural disaster changed all this. Though spared the calamity, the city is inundated with hardscrabble refugees that have overwhelmed its ability to accommodate them. Crowded into squalid tenements or outlying shantytowns, the newcomers have become pariahs and transformed the city guard into reviled oppressors. In this tumultuous new social order the unwelcome specter of plague has made its first appearance. It is up to a determined group of outsiders to wrestle with the mysterious origins of the Plague of Cosolen before it tears the city apart.The Plague of Cosolen is a HackMaster adventure located in the Kingdoms of Kalamar campaign setting. More specifically, this adventure focuses on the Kingdom of Cosdol and its capital city, Cosolen. It is designed to challenge four to six player characters of 3rd to 4th level.You are presented with a variety of options to integrate your PCs into the storyline (even a completely contrarian one for evil players!) Once immersed in the plot, brains and brawn are both required to stave off a disaster in the making.Even after the adventure has been completed, here’s some bonus features that make this a handy addition to your digital reference library:• Extensive description of the City of Cosolen for use in your campaign after the adventure is complete• Rules for Clerics of Mangrus and Raconteur• Miscellaneous rules covering smoke inhalation• Contains 8 pages of Monster Combat Cards to facilitate melee encounters

Be the first to review “HackMaster – Plague of Cosolen” Cancel reply 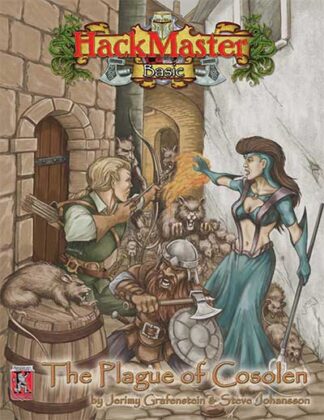