Kingdoms of Kalamar – Fury in the Wastelands: The Orcs of Tellene (PDF)

Kingdoms of Kalamar – Fury in the Wastelands: The Orcs of Tellene (PDF)

YOU’VE FOUGHT THEM FOR YEARS. NOW LEARN THE TRUTH.

There are few places in Tellene where spitting in disgust does not follow an utterance of the word ‘orc’. The mindset of the major, civilized races is so ingrained with loathing and contempt for these barbaric raiders that they are universally hated. Tales of their wanton destruction, rapacious nature, and complete disregard for any life, even that of their own kind, has earned them a bad reputation. However, is it totally deserved? For many centuries, orc warbands attacked settlements, raided caravans, and looted temples, but what drives them to perform such acts – and why haven’t they become civilized like the hobgoblins?

Contained within this 120-page sourcebook is the truth about orcs, presented in an unbiased style. The orcs’ history, culture, mindset, core religious beliefs, and methods of warfare are examined in detail. Even their guttural language is detailed for the first time.

Orcs have been present in Dungeons & Dragons® since the game was invented, and most DMs have a tendency to treat orcs as simple savages bent on looting and raping without mercy. Nevertheless, there is more to any race than the stereotype we imagine. Orcs are no more ‘simple’ savages than dwarves are ‘simple’ miners lusting after gold.

This book is designed for both players and DMs of D&D® (v3.5 edition). Players gain a wealth of information for playing full-blooded orc characters, with new feats, prestige classes, spells, and magic items for their characters to wield and enough information to give them as much depth as any of the standard races. DMs can use the same information to move orcs up the ladder from ‘experience point fodder’ to major threat, giving players a chance to learn the truth about these long neglected creatures through role-playing.

Chapter One contains the history of the orcs.

Chapter Two details the five different species of orc found on Tellene from a physiological and psychological viewpoint.

Chapter Three explains the orc social structure, how the various castes work together, and the process of how a tribe is governed.

Chapter Four goes into great depth on orc culture, covering everything from their cycle of life and habitats through to diet and language.

Chapter Six expands on the orc religion, detailing their gods’ tenets and their most important ceremonies.

Chapter Seven looks at misconceptions about orcs and the truth behind some of the more common beliefs.

Chapter Eight lists the major tribes on Tellene, their location, strength, and current events affecting them.

Chapter Nine gives 10 orc personalities, from powerful tribal ruler down to lowly slave, for use as allies or adversaries.

Chapter Ten explains everything you wanted to know about playing an orc, including new prestige classes and feats, as well as templates for the sub-breeds.

Chapter Eleven is a DM’s bestiary, detailing the new sub-breeds with a list of standard orc adversaries.

Chapter Twelve presents the DM with detailed adventure hooks for both orc and non-orc characters, along with four typical orc NPCs.

Appendix A contains a glossary of the orc words used throughout the sourcebook.

Appendix B reprints all the new orc rules from this tome, in a single easy to use chapter.

Appendix C is the index, giving you quick access to all the information you need.

Although easily converted for use in any campaign setting, this book is designed for use with Dungeons & Dragons® v3.5 edition, in the Kingdoms of Kalamar – a realistic, dynamic world where complex political alliances mix with marauding bands of humanoids, and medieval technology and culture come face to face with magic and the fantastic. Whatever type of adventure you seek, you can find it here.

Be the first to review “Kingdoms of Kalamar – Fury in the Wastelands: The Orcs of Tellene (PDF)” Cancel reply 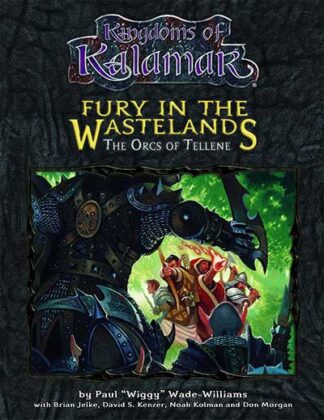 You're viewing: Kingdoms of Kalamar – Fury in the Wastelands: The Orcs of Tellene (PDF) $9.99
Add to cart